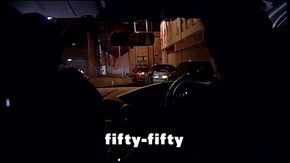 Fifty-Fifty is the 1543rd episode of The Bill.

PCs Quinnan and Carver find the body of John Boulton. Sun Hill is in shock, none more so than the devastated Stanton, who breaks down as she briefs Detective Superintendent Hodges. A shaken Don Beech visits Fallon and demands that he help him flee the country. Fallon pledges his help. He also visits Maggie and asks her to give him an alibi. The Area Major Incident Pool (AMIP) arrive at Sun Hill to investigate Boulton's death. Beech turns up too, and waits to find out if AMIP have any evidence that could implicate him in Boulton's murder.

CID, as well as Quinnan and Carver, are interviewed by AMIP, as is Howard Fallon. Fallon's interview is uproductive, but he secretly informs AMIP of Beech's involvement in Boulton's death, and they set up an ambush. Beech quickly realises that Fallon has sold him out and evades AMIP's trap. Stanton returns home and is shocked to find Beech waiting inside for her. He informs her that he knows she is an undercover officer, and wants to speak with her boss. When he comes face to face with Hodges, Beech confesses to years of corruption in the force, and to killing Boulton in self-defence. Stanton is stunned when Hodges agrees to the deal Beech offers: he will set up Fallon, Bazzini and two Drug Squad officers for Hodges, on the condition that he is only charged with manslaughter.

Hodges tells Stanton to let Beech talk with him, and on the way out, she kicks over Beech's chair and kicks him several times saying "It's what John would've wanted."

Retrieved from "https://thebill.fandom.com/wiki/Episode:Fifty-Fifty?oldid=35235"
Community content is available under CC-BY-SA unless otherwise noted.