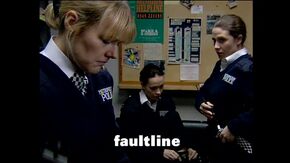 Faultline is the 1575th episode of The Bill

Dave Quinnan just stands and watches as a shopkeeper and a young woman are attacked by a gang of thugs at his local corner shop. When he finally turns up at the station, he identifies the leader of the gang as Robbie Gaitskill. Polly Page turns up in tears, and she and the rest of the relief are concerned as Dave seems to be cracking up. The crackheads arrested the previous night identify Quinnan as the policeman who attacked them. As Hagen and Page try to find him, Quinnan goes AWOL and tracks down the woman from the shop, Tricia Martin, and demands she tell him Gaitskill's address. Half the relief turn up on Gaitskill's doorstep, only to find Quinnan sitting in a car outside. Gaitskill is arrested, and Quinnan is told by Supt. Chandler to take his sick leave and seek professional counselling.

Retrieved from "https://thebill.fandom.com/wiki/Episode:Faultline?oldid=35429"
Community content is available under CC-BY-SA unless otherwise noted.