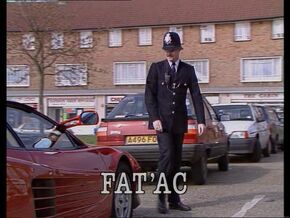 Written By
Julian Jones
Produced By
Pat Sandys
Directed By
John Bruce
Episode Chronology:
Previous
Back On The Streets
Next
Somewhere By Chance

FAT'AC is the 130th episode of The Bill

Yorkie is on hand at the scene of a fatal accident. Everyone is being held up and Yorkie is stressing out. Petrol is leaking from crushed car which has dead occupants. Sgt. Penny, when he finally arrives, tells Yorkie off for not blocking off the road. When Yorkie goes to move a bus on, he discovers the bus driver is the husband of the driver of the crushed car. Yorkie is in shock and Viv is worried about him. Cryer seems to be the only one who understands. Yorkie is talking about giving up.

Retrieved from "https://thebill.fandom.com/wiki/Episode:FAT%27AC?oldid=36328"
Community content is available under CC-BY-SA unless otherwise noted.