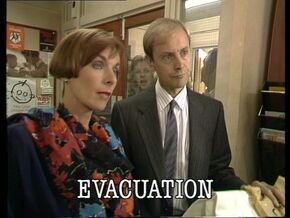 Evacuation is the 67th episode of The Bill

It's a busy day on the station front desk, and P.C. Smith fails to notice that someone has left a hold-all next to the desk. When it is discovered, Insp. Frazer orders the station evacuated as a safety measure while the bomb squad is called in. Sgt. Cryer and W.P.C. Martella have trouble getting a violent female prisoner into and out of her cell. D.C. Dashwood winds Smith up about not noticing the bag, and he conducts an interview with a suspect in a car. P.C. Edwards is acting oddly, arguing with W.P.C. Ackland and he keeps returning to the station looking for something. SO13 find an incendiary device in the bag, but it explodes, blinding an SO13 officer.

Retrieved from "https://thebill.fandom.com/wiki/Episode:Evacuation?oldid=34285"
Community content is available under CC-BY-SA unless otherwise noted.