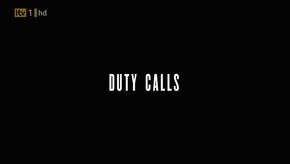 Sgt Stone and PC Taylor respond to a report of a burglary in progress. DCs Masters and Dasari interview the suspect, who claims to have believed the flat to be abandoned, but Masters becomes convinced that he has been stalking the woman who lives in the flat.

Retrieved from "https://thebill.fandom.com/wiki/Episode:Duty_Calls?oldid=33975"
Community content is available under CC-BY-SA unless otherwise noted.