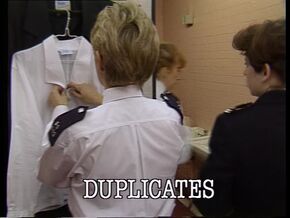 Written By
Simon Moss
Directed By
Niall Leonard
Episode Chronology:
Previous
Conflict
Next
Snout
Duplicates is the 72nd episode of The Bill.

Due to her slight resemblance to a missing woman, W.P.C. Brind reluctantly agrees to perform a reconstruction of her disappearance for television. D.C. Dashwood is interviewed on camera as part of the reconstruction, much to the relief's amusement. D.S. Roach and D.C. Carver go to serve an arrest warrant for video piracy, but instead find the aftermath of a bare-knuckle boxing match and a critically injured fighter. The organiser tries to bribe Roach. Carver and Roach manage to locate their video pirate, but Dashwood shows up late to the raid thanks to his television appearance. The missing girl's parents thank Brind for her help.

Retrieved from "https://thebill.fandom.com/wiki/Episode:Duplicates?oldid=34295"
Community content is available under CC-BY-SA unless otherwise noted.