Start a Wiki
Driven To Kill 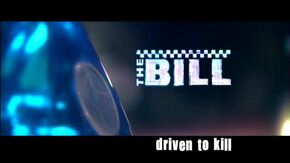 Written By
Emma Goodwin
Directed By
Matthew Whiteman
Episode Chronology:
Previous
Witness: The Final Act
Next
Pay Back
Driven To Kill is the 2231st episode of The Bill

Insp Gold is determined to crack down on a surge on hoax calls. Sgt Stone and PC Stamp are pelted with eggs when they respond to one hoax call, and hit with water balloons when they attend the reported sighting of a body in the river. Sgt Wright deals with a call from a boy who claims to have been kidnapped by his father.

Retrieved from "https://thebill.fandom.com/wiki/Episode:Driven_To_Kill?oldid=34900"
Community content is available under CC-BY-SA unless otherwise noted.