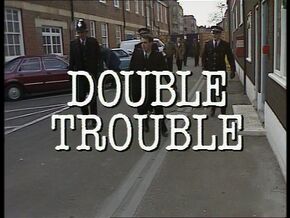 Double Trouble is the 31st episode of The Bill.

CIB (Complaints Investigation Bureau) arrives at the station and none of the early shift are allowed to leave as they investigate two uniformed officers pocketing a parking fine. Nerves are frayed on the relief, particularly those of P.C. Shaw and W.P.C. Ackland who come under particular scrutiny as they were on patrol at the time, with Shaw particularly in strife for not declaring Ackland as a passenger in his panda car. As Ackland and Shaw are interviewed, another report of the bent coppers comes in, and CID arrest a mechanic from the police garage and his girlfriend who were posing as police officers and pocketing on-the-spot fines.

D.I. Galloway needs eight men for an identity parade after an attack on a woman. D.S. Roach runs into a mob of football supporters who are "persuaded" to help them out.

P.C. Stamp spills a cup of coffee on the P.C. Patel's computer keyboard, causing Patel to lose all the work he has done.

P.C. Melvin helps a lady who has locked herself out of her car.

Retrieved from "https://thebill.fandom.com/wiki/Episode:Double_Trouble?oldid=33329"
Community content is available under CC-BY-SA unless otherwise noted.