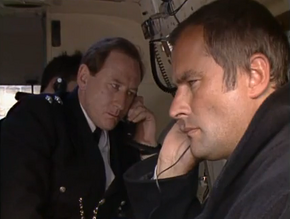 Conway negotiates with the armed robbers

Don't Like Mondays is the 142nd episode of The Bill

PC Edwards and PC Smith are called to a disturbance at a local bank, where they are surprised to find Tosh Lines' wife and children causing a commotion as there is no money left in their account. Edwards makes a discreet call to Sgt. Peters, who suggests to Tosh that he head down to the bank and sort things out. As PC Ramsey and WPC Ackland also arrive, the bank is raided by an armed gang. Tosh Lines arrives and charges towards the bank, but as PC Ramsey runs to stop him, he is shot in the chest by one of the robbers. Ch. Insp. Conway negotiates with the gang as armed PT17 officers surround the building. Sgt. Cryer offers to drive the getaway car, but disconnects the ignition when he leaves it at the bank entrance. PC Smith and the other hostages are released, but PC Edwards is taken hostage. He manages to makes a run for it and the PT17 officers open fire on the car.

Retrieved from "https://thebill.fandom.com/wiki/Episode:Don%27t_Like_Mondays?oldid=28884"
Community content is available under CC-BY-SA unless otherwise noted.