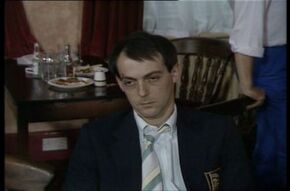 Written By
Edwin Pearce
Directed By
Peter Cregeen
Episode Chronology:
Previous
Missing, Presumed Dead
Next
What Are Little Boys Made Of?

Domestics is the 28th episode of The Bill.

Residents take action against a women's refuge in their area, while P.C. Yorkie Smith gives advice to the husband of a woman at the refuge.

As D.I. Galloway gets tough with his detectives about the clear up rates of burglaries in the area, W.P.C. Martella and P.C. Edwards pull in a man suspected of three burglaries.

P.C. Edwards is getting a hard time because of his impending marriage.

Retrieved from "https://thebill.fandom.com/wiki/Episode:Domestics?oldid=19895"
Community content is available under CC-BY-SA unless otherwise noted.