Start a Wiki
Digging Up The Past 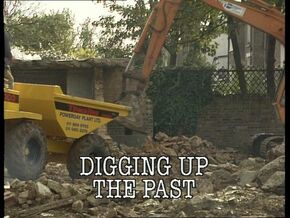 Written By
Barry Appleton
Directed By
Barry Davies
Episode Chronology:
Previous
Outmoded
Next
Taken Into Consideration
Digging Up the Past is the 82nd episode of The Bill.

An excavator on a building site has uncovered some human remains, and Sgt. Cryer calls in CID. Cryer is avoiding returning to the station, as his son Patrick is being charged with causing death by dangerous driving. Ch. Insp. Conway, D.I. Burnside and D.S. Roach each have a word with Cryer, who is avoiding his family. On the building site, D.C. Dashwood and the S.O.C.O. wind up the site manager by saying it may have been a murder, although the bones are several hundred years old. A riot ensues as the men want to return to work. Burnside arrives and arrests them all. The bones turn out to be from the Great Plague of 1665.

P.C. Edwards is angry after being sold forged theatre tickets by P.C. Ramsey. Ramsey claims innocence, and the pair manage to track down the forgers. Unable to interest CID in the case, they investigate on their own, but end up inadvertently blowing a joint Fraud Squad/U.S. Treasury operation to catch counterfeiters printing fake American dollars.

Retrieved from "https://thebill.fandom.com/wiki/Episode:Digging_Up_The_Past?oldid=34315"
Community content is available under CC-BY-SA unless otherwise noted.