Start a Wiki
Death of A Cracksman 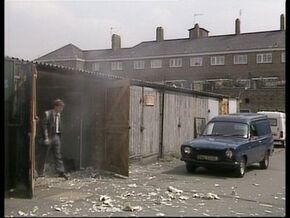 Death of A Cracksman is the 10th episode of The Bill. Hot on the trail of a safebreaker who has escaped from prison, CID discover he has been killed.

Alfie Mullins is a non-returned prisoner, not a dangerous prisoner as reported. He is an old-fashioned safe-cracker who, just as he is returning to the prison, is approached by one of a gang of thieves who want Alfie to open a safe they pinched. While they are talking Alfie is accidentally killed. The safe is rigged to explode by remote control which P.C. Carver accidentally sets off when he uses his radio.

Retrieved from "https://thebill.fandom.com/wiki/Episode:Death_of_A_Cracksman?oldid=19751"
Community content is available under CC-BY-SA unless otherwise noted.