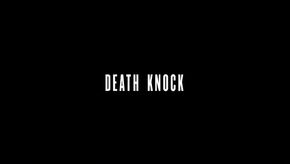 Death Knock is the 2402nd episode of The Bill.

Kirsty and Nate are called to a disturbance and attend to a young woman who has apparently fallen from a first floor window. Investigators discover that the house is a brothel, and suspicion falls on the woman's pimp, but there is insufficient evidence to prosecute. Stone is not bothered when he discovers that his father has died.

PC Nate Roberts was not cast for any episodes after this, making it his last appearance.