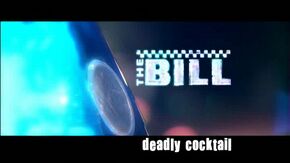 Deadly Cocktail is the 2239th episode of The Bill.

PCs Valentine and Green respond to the reported sighting of a body being thrown into the river. DS Carter leads an investigation into the murder of a doctor, recently exonerated after allegations of professional negligence.

Retrieved from "https://thebill.fandom.com/wiki/Episode:Deadly_Cocktail?oldid=34924"
Community content is available under CC-BY-SA unless otherwise noted.