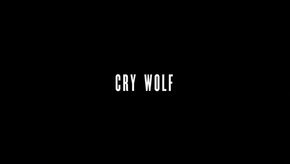 Written By
Matthew Bardsley
Produced By
James Hall
Directed By
Reza Moradi
Episode Chronology:
Previous
Die By The Sword
Next
Absolute Power
Cry Wolf is the 2353rd episode of The Bill.

D.C. Mickey Webb is frustrated after having to release teenager Grant Shepherd on suspicion of raping 17 year old Caitlin Macey. Although there is no forensic evidence, Mickey is convinced that Caitlin was attacked but isn't certain that Grant is the rapist. After speaking to D.I. Neil Manson, Mickey is given another day to investigate and asks D.C. Jacob Banks for his help.

The two officers, along with P.C. Mel Ryder head to Caitlin's home where they tell Caitlin's mother, Lorraine and step-father Craig that they need to question their daughter again. However, as they wait for Caitlin to finish her bath, Mel realises that there is no one in the bathroom and discovers an empty bottle of pills. Horrified, the officers rush out of the house and find a semi-unconscious Caitlin down an alleyway...

After being discharged from the hospital, Mickey gently questions Caitlin who tells him that everything is jumbled up. Mickey tells her that he firmly believes she was raped, but that they may be looking at the wrong suspect. As the investigation continues, Mickey and Banksy realise that the attack didn't take place recently, as Caitlin claimed.

Mickey talks to Caitlin again and attempts to regress her memories: the interview provides Mickey with more evidence and between them, he and Banksy realise that the rape took place at a family party two years previously. Lorraine and Craig are horrified by the latest turn of events but provide the police with a video tape from the party, which shows Caitlin, horribly drunk and stumbling up the stairs to her bedroom, followed swiftly by her step-father...

Mickey questions Craig who is disgusted by the allegation that he may have raped Caitlin. He tells Mickey that he helped her to bed and knowing how drunk she was, made sure that she wasn't sick before falling asleep. The D.C.’s instinct tells him that Craig had nothing to do with Caitlin’s attack but Mickey grows more frustrated with the case.

However, later that day, Caitlin calls Mickey and tells him that she remembers who raped her at the party, but the truth will blow two families apart. Can Caitlin reveal who attacked her, in order to move on with her life...?

Retrieved from "https://thebill.fandom.com/wiki/Episode:Cry_Wolf?oldid=34094"
Community content is available under CC-BY-SA unless otherwise noted.