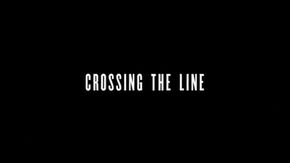 Crossing The Line is the 2378th episode of The Bill.

An off-duty Sgt Stone sees a couple arguing. When the man starts to hit the woman, Stone intervenes, but is badly beaten. Jo interviews the woman, who claims she was the victim of a random mugging and doesn't want to make a statement. New PC Kirsty Knight and PC Ryder uncover a relationship between the man and the woman's son, but when there is insufficient evidence to prosecute, Callumdecides to take the law into his own hands and beats Hardacre to a pulp. Jo confronts Stone about the attack but he denies all knowledge, with no evidence, Jo leaves. Back at the station Jo tells Smithy the case will just get NFA'd.