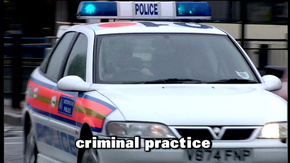 Written By
J.C. Wilsher
Directed By
Peter Cregeen
Episode Chronology:
Previous
Appropriate Action
Next
Upon Information Received
Criminal Practice is the 1565th episode of The Bill.

D.C. Webb and D.C.Riley wait outside a cafe, whilst inside D.S. McAllister is conducting a rather clumsy undercover sting on a suspected drug dealer. D.I. Cullen is furious when the suspect is released without charge following McAllister's poor handling of the case. Resentful of D.S. Singh's success in recruiting local informants, McAllister manages to coax some information from solicitor's clerk Jamie Ross, which eventually leads to a successful arrest when Ross's information blows apart a stabbing suspect's alibi. Pleased with her success, McAllister is determined to convince Ross to work as an informant for her.

Meanwhile, Riley meets up with his brother Joe, who seems to be in some trouble with the police in Northampton.

Retrieved from "https://thebill.fandom.com/wiki/Episode:Criminal_Practice?oldid=35329"
Community content is available under CC-BY-SA unless otherwise noted.