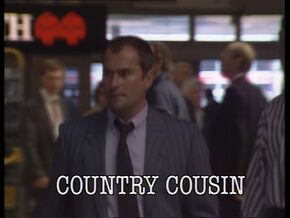 D.I. Burnside waits impatiently at the train station to pick up a D.S. Jarvis from one of the country forces, who is arriving in London to arrest a suspect believed to be living in Sun Hill. After warning Jarvis for punching the suspect in the face, Burnside takes Jarvis to an East End club where the badly-behaved country copper ends up fighting with the manager and bouncer over the cost of a prostitute. P.C. Edwards and P.C. Haynes attend a bus crash where the driver and several passengers are badly injured. Accompanying the driver to hospital, it is discovered he was suffering from epilepsy which he had not declared to his employers. W.P.C. Martella drives Sgt. Penny to a doctor's check-up to ascertain whether he can return to normal duties after his shooting.

This is the first episode in the series to not feature Eric Richard as Sgt. Bob Cryer.

Retrieved from "https://thebill.fandom.com/wiki/Episode:Country_Cousin?oldid=36333"
Community content is available under CC-BY-SA unless otherwise noted.