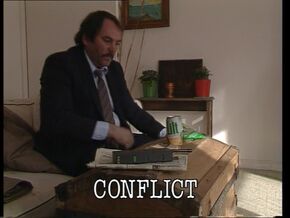 Written By
Al Hunter
Directed By
Graham Theakston
Episode Chronology:
Previous
Intruder
Next
Duplicates
Conflict is the 71st episode of The Bill.

D.C. Lines and D.C. Carver are carrying out an obbo on a man who might lead them to an arms dump. Things don't go according to plan when W.P.C. Ackland and P.C. Ramsey are called to a domestic disturbance at the man's house and arrest him for assaulting his girlfriend. The doctor at the hospital makes a complaint against Ramsey because of the way he interrogates the girlfriend. Things go from bad to worse for CID when the man is released, but their surveillance is blown by an indiscreet traffic policeman.

Retrieved from "https://thebill.fandom.com/wiki/Episode:Conflict?oldid=34293"
Community content is available under CC-BY-SA unless otherwise noted.