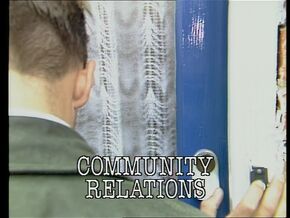 P.C. Melvin and P.C. Ramsey are in a garden shed doing an obbo on a garage believed to contain with stolen motorbikes. Ramsey is winding Melvin up about being a Christian, when a ball is kicked through the window. The owner of the shed gets into a violent row with his family, and while Melvin and Ramsey are dealing with the domestic at the house, they miss the suspect arriving at the garage. Ch. Insp. Conway attends a meeting at the Town Hall with residents of the Jasmine Allen Estate, but the meeting degenerates into arguments and slanging matches. P.C. Smith brings in a violent prisoner from the estate who was high on cocaine, but Sun Hill faces a death in custody when the man dies of an overdose shortly after arrival. With a riot brewing outside, Insp. Frazer must convince the man's father to tell the mob to blame the drugs, not the police.

Retrieved from "https://thebill.fandom.com/wiki/Episode:Community_Relations?oldid=34257"
Community content is available under CC-BY-SA unless otherwise noted.