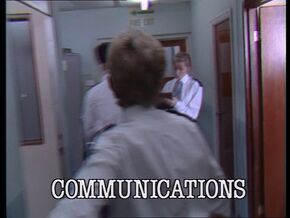 Written By
Jonathan Rich
Produced By
Geraint Morris
Directed By
Alan Wareing
Episode Chronology:
Previous
Only A Bit of Thieving
Next
Silver Lining

Communications is the 119th episode of The Bill.

Chief Insp. Conway visits the CAD room and others to try and encourage officers to talk about their problems. W.P.C. Ackland asks Conway what he thinks her chances are of becoming a sergeant. After being wound up by Sgt. Penny, P.C. Edwards talks to Conway about getting a transfer from Sun Hill as his wife does not like living in the city. Edwards and W.P.C. Brind visit the parents of a missing girl before starting door-to-door enquiries in the neighbourhood. Brind thinks that she has found a witness but the woman's son says that she was in a home when the girl was last seen. While door knocking, a car alarm causes frayed tempers. When the owner refuses to turn off the alarm, the car is vandalised. The missing girl is later found in the market.

Community content is available under CC-BY-SA unless otherwise noted.