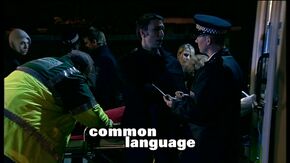 Common Language is the 1568th episode of The Bill.

A young Russian girl leads P.C. Smith out of a nightclub, where he is promptly attacked by three men. Despite Smith's protests, Supt. Chandler assigns D.I. Cullen to investigate the assault. They track down the Russian woman, Natasha Ivanova, through a language school which seems to be recruiting students to work as prostitutes. Natasha is desperate as her visa is about to expire, and her sister has disappeared. Her sister is found murdered, and Smith realises the men responsible for her death and his assault are linked to a man from his old army unit.

Retrieved from "https://thebill.fandom.com/wiki/Episode:Common_Language?oldid=36176"
Community content is available under CC-BY-SA unless otherwise noted.