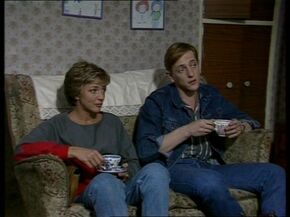 "Clutching at Straws" is the 3rd episode of The Bill. Carver's self-control is put to the test when he investigates an alleged child molester.

At the start the shift a young boy, Billy is assaulted in a lift on a run-down estate by a gang of thugs. One of the gang, Terry Collins, is of the impression he owns all the girls on the estate, including the girl Billy has been dating. The gang are heavy drinkers and solvent abusers and their brand of punishment as well as physical assault includes gluing victims' hands and faces to the floors and walls.

Sgt. Bob Cryer briefs the team at the start of the shift that another assault on a young girl has taken place. This is the third in a short period of time, none of the girls had been raped but they had been sexually assaulted. He stresses that this has to be one of their priority cases. After spending all night stuck in the lift, Billy is eventually found by a woman on the estate and the call is made to Sun Hill.

PC Jim Carver patrols the estate making enquiries about the assault and at the same time befriends a gang of youths who aren't causing trouble but have nothing productive to do. He asks why they're hanging out on the streets and they tell him they have nowhere to go and the youth club that used to be open closed down. The man who ran it, who they call 'creepy' did a disappearing act. Jim tells them he'll talk to the man and offer his own services to help run the club but the kids tell him he's wasting his time, no one will be interested in help from the police. PC Dave Litten thinks Jim's wasting his time too and makes it known to his colleague that he's not a fan of the idea, or him!

Billy is reluctant to press charges which causes his brother to take matters into his own hands despite repeated warnings about doing so from Bob. His brother is very cold towards Bob's intervention. In the end the thugs are given a taste of their own medicine, not something that had been condoned by the law....

DI Roy Galloway is furious when another young girl, this one a child, is almost assaulted. Luckily she gets scared and alerts someone in time, unfortunately the suspect gets away. DS Ted Roach investigates the attempted abduction from outside the school.

Jim persuades W.P.C June Ackland to go onto the estate with him and try and talk to the previous youth club coordinator, Simon Doleman. Little does he know that the man he seeks advice from is the man that Ted is looking for, the suspect. Simon's mother is obviously mentally unstable when they visit. June talks to the man and begins to sympathise with him but as soon as the officers leave, Simon turns on his mother and takes his belt to her, telling her she must be punished because she said too much and misbehaved.

Before they leave Jim tells June he just wants to see if Terry Collins is at home, despite being off duty. They get lucky and after a hefty scuffle in which both the pair take a mild beating and June even loses her top, they make an arrest.

Roy and Bob start putting two and two together regarding the assaults and the man June and Jim have been speaking to when Simon's name turns up on a list of possible suspects. Jim then remembers seeing Simon return to his house just after the assault that morning.

In the end, by the time the team realise, they go to Simon's house but are too late. He's realised that the police are catching up with him and panicking, slits his own wrists. He bleeds to death on his bed, which causes a great deal of distress for Mrs Doleman, leaving June to pick up the pieces.

Retrieved from "https://thebill.fandom.com/wiki/Episode:Clutching_At_Straws?oldid=32687"
Community content is available under CC-BY-SA unless otherwise noted.