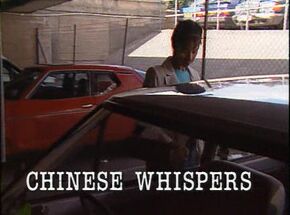 Written By
Christopher Russell
Directed By
Julian Aymes
Episode Chronology:
Previous
The Return of the Prodigal Son
Next
Powers of Exclusion

Chinese Whispers is the 185th episode of The Bill

W.P.C. Datta can't get her car started. A man who offers to help turns out to be a bogus repairman who has been operating in the area. Datta and P.C. Quinnan are on the beat together when they are told of a blind man who has been mugged by three men who had been drinking. Rumours start to circulate Sun Hill after an estate surveyor is seen looking at the station. Quinnan is trying to impress all the W.P.C.s and asks W.P.C. Ackland if he can buy her a drink later. She thinks it is a date. Quinnan solves a theft at a jewellers. Insp. Frazer may be up for an exchange trip to New York. Ch. Supt. Brownlow has an informal chat with P.C. Turnham. Quinnan sees Turnham afterwards and makes remarks about the Mrs. Brownlow. P.C. Phil Young also arrives at the station.

Retrieved from "https://thebill.fandom.com/wiki/Episode:Chinese_Whispers?oldid=34802"
Community content is available under CC-BY-SA unless otherwise noted.