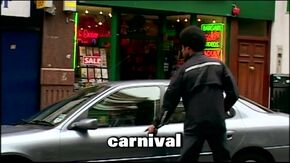 Carnival is the 1553rd episode of The Bill.

D.C. Glaze and P.C. McCann end up at loggerheads over each other's attitudes to policing when they work together to investigate a drugs case. A heated conversation and a brush with death for Glaze during the London Carnival inspire both officers to change their ways: McCann applies to take the sergeants' exam, and Glaze shaves off his afro.

An epilogue (showing Glaze getting a haircut and McCann applying for his sergeant's exam) is played over the closing credits in place of a trailer for the next episode.