Start a Wiki
By The Book 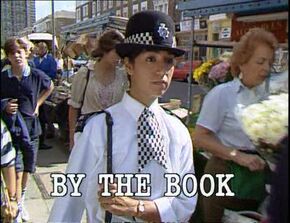 Written By
John Milne
Directed By
Jeremy Silberston
Episode Chronology:
Previous
Feasting With Panthers
Next
Beer and Bicycles
By The Book is the 175th episode of The Bill

W.P.C. Datta talks to a driver who has parked illegally. She then deals with an upset drug addict at a pharmacy. The girl is later found badly beaten and her prescription missing. D.C. Dashwood is worried that there is something fishy about the prescription, and checks out her doctor. P.C. Able is upset at how a father reacted to being asked about his son's tax disc. Insp. Frazer is concerned about Able and Garfield's statement-taking. She sets up a role play situation so they can practice, but it is interrupted by a gas mains leak.

Retrieved from "https://thebill.fandom.com/wiki/Episode:By_The_Book?oldid=34726"
Community content is available under CC-BY-SA unless otherwise noted.