Start a Wiki
Burning The Books 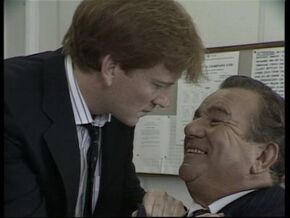 Written By
Barry Appleton
Produced By
Michael Chapman
Directed By
Peter Cregeen
Episode Chronology:
Previous
Rough In The Afternoon
Next
Death of A Cracksman

Burning The Books is the 9th episode of The Bill. The CID are on the trail of a thug who has stolen a briefcase from a car. The theft leads them to an old adversary of Galloway's.

Retrieved from "https://thebill.fandom.com/wiki/Episode:Burning_The_Books?oldid=33294"
Community content is available under CC-BY-SA unless otherwise noted.