Start a Wiki
Blue For A Boy 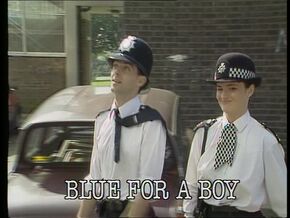 W.P.C. Martella and P.C. Edwards are on the beat, and intervene when they find a man arguing with a young mother. D.C. Dashwood goes to meet a snout, and is nearly run over by the man Martella and Edwards questioned before. The woman, Brenda Knight says he has abducted her baby, but claims she doesn't know him. Burnside is suspicious, and puts the pressure on Brenda until she admits that the man who took the baby is Sam Rice, who paid her £2000 to bear his surrogate child, which she then refused to hand over. After questioning Rice's wife, W.P.C. Ackland finds him at the hospital with the baby who is in good health.

Retrieved from "https://thebill.fandom.com/wiki/Episode:Blue_For_A_Boy?oldid=34267"
Community content is available under CC-BY-SA unless otherwise noted.