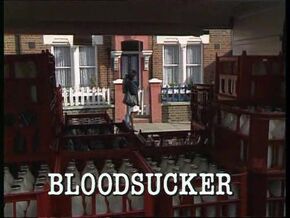 Written By
Steve Trafford
Directed By
Chris Hodson
Episode Chronology:
Previous
Against The Odds
Next
Workers In Uniform

Bloodsucker is the 199th episode of The Bill.

W.P.C. Ford and P.C. Melvin investigate a domestic. The wife initially says she fell down stairs initially. A neighbour keeps interrupting. The wife owes money, and her child benefit book has been taken by a money lender. The husband is suspected of slashing tyres. Insp. Monroe talks to W.P.C. Marshall about regular updates of clear-up figures. P.C. Quinnan voices his opinion on battered women. The calculators he has been selling are faulty. Not only does he have to give buyers their money back, but the money he got has to be put into Ch. Supt. Brownlow's charity box. Mr Brownlow asks about the money lender and states he would like to nick him as he is the money man behind a lot of crime. Melvin and Ford go to the money lender's shop and find the husband, who has been assaulted with a golf putter.

Tristan Maguire guest stars as Terry in this episode.

Retrieved from "https://thebill.fandom.com/wiki/Episode:Bloodsucker?oldid=34828"
Community content is available under CC-BY-SA unless otherwise noted.