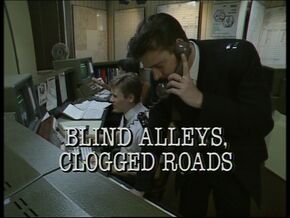 Written By
Lionel Goldstein
Directed By
Graham Theakston
Episode Chronology:
Previous
What Are Little Boys Made Of?
Next
Double Trouble

Blind Alleys, Clogged Roads is the 30th episode of The Bill.

P.C. Jim Carver is sent to the morgue to investigate a suspicious drowning. The victim has clearly been planted with several items such as theatre tickets, badly-fitting clothes and an odd suicide note. D.S. Roach has a theory it's an assassination by the British secret service.

D.I. Roy Galloway and D.C. Mike Dashwood are reprimanded by a judge for not bringing all their evidence in a fraud case to the court. They race back to Sun Hill in the recess to retrieve the documents, but on the way back, Galloway runs into a black cab. An argument ensues, and Galloway nicks the cabbie for breach of the peace. Half the cabbies in London blockade the station in protest.

P.C. Nick Shaw is slashed with a knife when breaking up a fight between two brothers-in-law, but Sgt. Penny refuses to charge the suspect.

W.P.C.s Ackland and Martella wind up P.C. Reg Hollis and convince him to pay for the renovation of the station rec room by telling him they need creche facilities in the station.

An Asian man arrives at the station to report continued harrassment, and a young boy is brought in for graffiting a Rolls-Royce.

Carver nicks a mugger who attacked Martella at a tube station.

Retrieved from "https://thebill.fandom.com/wiki/Episode:Blind_Alleys,_Clogged_Roads?oldid=33327"
Community content is available under CC-BY-SA unless otherwise noted.