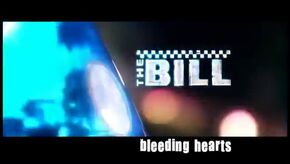 Bleeding Hearts is the 2316th episode of The Bill.

PCs Roberts and Gayle are respond to a report of an attempted break-in, and uncover an unauthorised house-party that got seriously out of hand. Roberts is smitten by a nurse with a personal interest in an assault case.

Retrieved from "https://thebill.fandom.com/wiki/Episode:Bleeding_Hearts?oldid=34178"
Community content is available under CC-BY-SA unless otherwise noted.