Start a Wiki
Between Friends 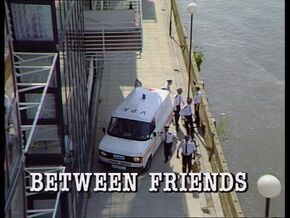 Written By
Barry Appleton
Directed By
Barry Davis
Episode Chronology:
Previous
Overspend
Next
Traffic
Between Friends is the 137th episode of The Bill.

Dashwood and Roach investigate a break-in at an apartment on the Thames. The burglar is chased and caught by uniform. He claims chloroform was planted on him but later changes his story to finding it in the apartment. Brownlow is off to a meeting on a golf course, furious that his golf clubs are still missing from his car. He is later offered a set of clubs at a discount by a shady member of the club. Complaints have been made about the station not flying the flag so Melvin and Turnham are ordered to look for it. The flag pole is also missing.

Retrieved from "https://thebill.fandom.com/wiki/Episode:Between_Friends?oldid=34649"
Community content is available under CC-BY-SA unless otherwise noted.