Start a Wiki
Beer and Bicycles 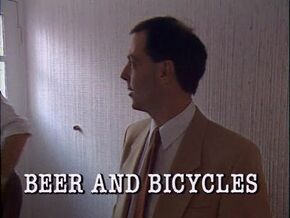 Written By
Christopher Russell
Directed By
Nick Laughland
Episode Chronology:
Previous
By The Book
Next
Grace of God

Beer and Bicycles is the 176th episode of The Bill.

Ch. Insp. Conway talks to the relief about image: "Efficient service with a smile". W.P.C. Martella is asked to do surgery that afternoon. Booze has been found in the Collator's room, leading Conway to search the rest of the station for any more. P.C. Edwards goes for counselling. He thinks it will be a one-off but the counsellor thinks different. The counsellor thinks he made headway until Taffy makes a comment about wasting time. Edwards sends his wife to Wales to look for a house for them. P.C. Able is on patrol on a bike, catching a woman getting out of a car used in a wages snatch. P.C. Stamp is not happy that he has to transport the dog handler around in the area car.

Retrieved from "https://thebill.fandom.com/wiki/Episode:Beer_and_Bicycles?oldid=34728"
Community content is available under CC-BY-SA unless otherwise noted.