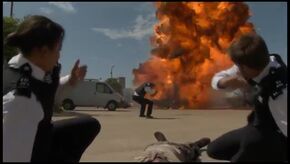 After an assault at St. Hughs, Stone convinces the unstable victim that the case is not necessary to the police. The man goes off the rails, kidnapping his baby son and crashes his car, which erupts in a fireball, however the baby is missing.

Amelda Brown guest stars as Norma Stocks in this episode.

Final appearance of DC Will Fletcher.

Retrieved from "https://thebill.fandom.com/wiki/Episode:Be_A_Man?oldid=33778"
Community content is available under CC-BY-SA unless otherwise noted.