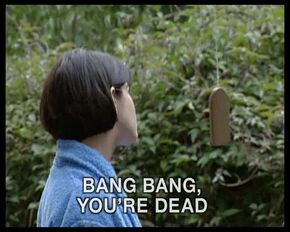 Bang Bang You're Dead is the 1359th episode of The Bill.

Dave Quinnan and Eddie Santini organise a 'Ranks-versus-Guvnors' paintball challenge for charity. Rosie Fox takes the day off work with a migraine, but turns up in time for the paintball challenge. Conway is looking forward to it and has brought his nephew's paintball gun with him, but is annoyed to find that Reg Hollis has been chosen as captain of the Guvnors' side. Eddie uses the day as another excuse to bully Rosie. He goes off on his own to hunt for Rosie and jumps up on her. Later, he deliberately spills coffee over her. The Guvnors end up winning, mainly thanks to someone wearing a Terminator motorcycle helmet (who turns out to be Sgt. Boyden).

Later, Boulton's robbery suspect escapes from court during an adjournment, before being tracked down and chased to a derelict building. Fox and Santini are paired again and pursue him to the roof. They continue to bicker and Santini disobeys orders and leaves Rosie on her own. She is subsequently taken hostage by the suspect. When Santini hears her screams he rushes back and helps rescue her, but she is furious when he denies abandoning her and swears she will not let him bully her any more.

Retrieved from "https://thebill.fandom.com/wiki/Episode:Bang_Bang,_You%27re_Dead?oldid=35297"
Community content is available under CC-BY-SA unless otherwise noted.