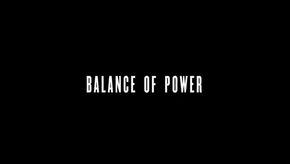 Balance of Power is the 2401st episode of The Bill.

PCs Knight and Taylor call at the home of a couple who have been reported missing and discover that the house has been burgled. DC Dasari and DS Moss investigate and suspect the couple's son of involvement, but DS Carter's investigation into the couple's finances provides the key breakthrough.

Michael Cochrane and Sally Faulkner guest stars as Howard Walsh and his wife Fiona in this episode.