Start a Wiki
Bad For Your Health Part One 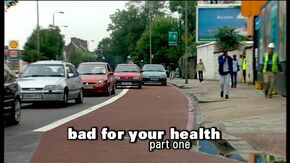 Bad For Your Health Part One is the 1560th episode of The Bill.

It's Dave Quinnan's first wedding anniversary, and tensions are high between him and Polly Page. A series of brutal beatings reveals a turf war between two rival gangs of cigarette smugglers. Nick Klein finds himself in trouble when he tries to buy a mixing desk from his favourite DJ, Johnny Margolis, and ends up abducted by the McBride gang.

Retrieved from "https://thebill.fandom.com/wiki/Episode:Bad_For_Your_Health_Part_One?oldid=35310"
Community content is available under CC-BY-SA unless otherwise noted.