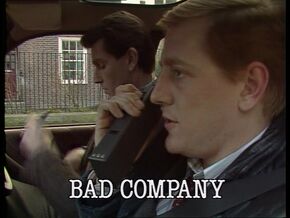 Bad Company is the 105th episode of The Bill

Dashwood and Carver investigate a fight at a bail hostel. A man bailed for receiving has been beaten up and jumps off the roof and runs away. He is later found in a moneylender's basement badly beaten owing a couple of hundred pounds plus interest. Melvin is approached by a man on the street who tells him there is something dodgy going on by the old chocolate factory. On entering the factory, he is stopped by a man with a gun after he has radioed in his position. Turns out to be a gun deal. Taffy and Yorkie are sent to the factory to look for him.

Retrieved from "https://thebill.fandom.com/wiki/Episode:Bad_Company?oldid=34585"
Community content is available under CC-BY-SA unless otherwise noted.