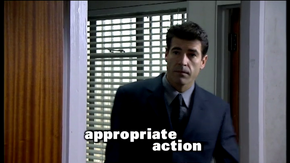 Appropriate Action is the 1564th episode of The Bill.

A teenage boy is found badly beaten, and a young girl, Lisa, from the same school is missing. D.C. Webb shows little interest in the case, so Sgt. Cryer investigates the girl's disappearance himself. A local 'photographer', Andrew Morton, is the main suspect, as he has an obsession with Lisa and her friends, and he is arrested when P.C. Harker spots him acting suspiciously by the canal. When Lisa turns out to have been hiding out at a friend's house the whole time, Cryer must rush to prevent Lisa's father from taking the law into his own hands by going after the innocent Morton.

Retrieved from "https://thebill.fandom.com/wiki/Episode:Appropriate_Action?oldid=36174"
Community content is available under CC-BY-SA unless otherwise noted.