Start a Wiki
An Old-Fashioned Term 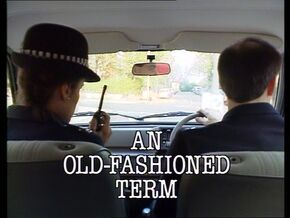 P.C. Edwards and W.P.C. Martella find the naked body of a young woman who appears to have gassed herself to death, but they notice the neighbour who reported the death wiping something from the dead girl's mouth. D.C. Carver can't believe D.C. Lines has been a D.C. for twelve years. Lines isn't convinced the girl's death was a suicide, and impresses Carver with his detective skills when he solves the case - the neighbour, Kelly, has knocked her out with chloroform, raped her, and then turned on the gas. Kelly finally admits it, but Tosh is upset when he won't admit why. D.C. Dashwood is furious when D.S. Roach stands him up on an obbo to have dinner with Insp. Christine Frazer.

D.C. Tosh Lines has been in the job for fifteen years, and a detective for twelve.

Retrieved from "https://thebill.fandom.com/wiki/Episode:An_Old-Fashioned_Term?oldid=34303"
Community content is available under CC-BY-SA unless otherwise noted.