Start a Wiki
All In Good Faith 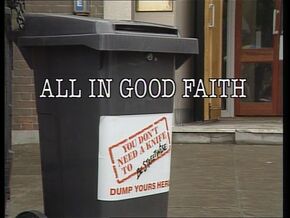 Written By
Barry Appleton
Produced By
Michael Ferguson
Directed By
Gareth Davies
Episode Chronology:
Previous
Home Sweet Home
Next
Just Call Me Guvnor
"All In Good Faith" is the 40th episode of The Bill.

W.P.C. Viv Martella and W.P.C. June Ackland report entry by artifice involving a bogus gasman to Acting D.I. Ted Roach. As Ackland and D.C. Mike Dashwood investigate the two latest cases, the widow of a gas inspector locks the bogus gasman in her basement. Insp. Christine Frazer has a serious talk to P.C. Pete Ramsey. There is a weapons amnesty bin outside the station, and when CID discovers a gun that was used in a robbery five years ago, Roach is determined to nail the suspect, Pat Duffy. Ch. Insp. Conway seeks legal advice as to whether the gun can be used as evidence as it was handed in during an amnesty. Roach disobeys Conway's orders and arrests Duffy. Conway is furious, but Roach tells him that they're in the clear as Duffy's ex-wife handed the gun in.

Retrieved from "https://thebill.fandom.com/wiki/Episode:All_In_Good_Faith?oldid=33762"
Community content is available under CC-BY-SA unless otherwise noted.