Start a Wiki
Alarms and Embarrassments 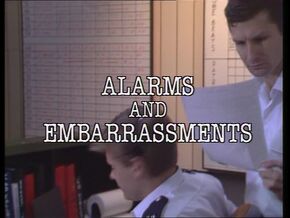 P.C. Smith is called to a robbery at an off-licence. When D.C. Dashwood investigates, he finds that the witness recognises people by looking at their teeth.

Sgt. Penny is thinking of his holiday, but is put off the idea of going to Corfu by P.C. Hollis, who still has sea urchin spines in his foot.

P.C. Stamp is in charge of organising an identity parade, for which D.S. Roach has brought in an elderly witness, but she doesn't pick out the suspect.

P.C. Edwards brings a handicapped mugging victim into the station to make a statement. The man can barely speak and cannot write, so ends up typing out his own statement on a typewriter.

On her way back to the station, Insp. Frazer arrests a bag lady she found sitting in the middle of the street. The woman later sets fire to her cell.

Retrieved from "https://thebill.fandom.com/wiki/Episode:Alarms_and_Embarrassments?oldid=34331"
Community content is available under CC-BY-SA unless otherwise noted.