Start a Wiki
A Reflection of Glory 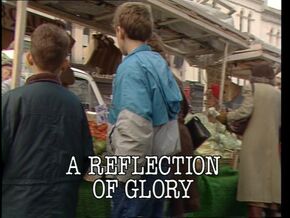 Written By
Brendan J. Cassin
Produced By
Richard Bramall
Directed By
Christopher Hodson
Episode Chronology:
Previous
Getting It Right
Next
One To One
A Reflection of Glory is the 85th episode of The Bill.

P.C. Ramsey is back in uniform and goes with P.C. Haynes to see about a shoplifter who claims she is innocent. While they are out the back, the shop is held up by armed robbers who shoot at Ramsey. D.I. Burnside thinks it is tied in with other robberies and sends D.C. Carver to have a word with his evasive snout, Leroy. D.C. Dashwood has a new suit much to the amusement of his colleagues. It gets damaged while he is chasing one of the suspects in the robbery. Haynes later tails the other suspects, causing them to crash into a milk float. W.P.C. Ackland and P.C. Melvin are approached by a man who says his friend might be about to kill himself in the toilet of a gay club, and the friend is arrested for possessing an offensive weapon. While being charged, he punches Sgt. Peters who drops the knife. The other man goes for it, but is stopped by Ackland.

Retrieved from "https://thebill.fandom.com/wiki/Episode:A_Reflection_of_Glory?oldid=34319"
Community content is available under CC-BY-SA unless otherwise noted.