Start a Wiki
A Quiet Life 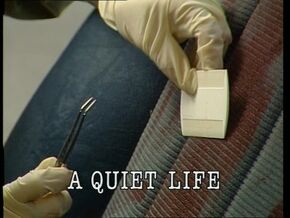 Written By
Simon Moss
Directed By
Sharon Miller
Episode Chronology:
Previous
Somewhere By Chance
Next
Tom Tiddler's Ground
A Quiet Life is the 132nd episode of The Bill.

Jim Carver is at the hospital talking to the wife of the victim of a robbery who had a heart attack. It is the latest in a string of robberies. Tony Stamp finds a man clearing the skip he hired of other people's rubbish. Tony's card is eaten by an ATM before he is called back to the skip. June Ackland brings in a prostitute with an expensive watch. Her boyfriend is suspected of a jewel robbery.

Retrieved from "https://thebill.fandom.com/wiki/Episode:A_Quiet_Life?oldid=34639"
Community content is available under CC-BY-SA unless otherwise noted.