Start a Wiki
A Little Knowledge 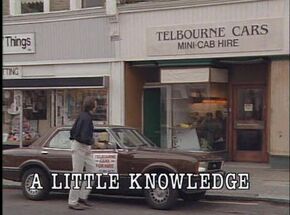 A Little Knowledge is the 151st episode of The Bill

D.C. Lines goes undercover as a minicab driver to sit in on an illegal poker game at the cab office. Police raid the wrong place. W.P.C. Marshall complains to P.C. Edwards about putting the intelligence cards back. She is set up by D.C. Carver and Lines but later gets her own back. P.C. Garfield goes undercover to investigate muggings of pizza delivery boys.

Retrieved from "https://thebill.fandom.com/wiki/Episode:A_Little_Knowledge?oldid=34674"
Community content is available under CC-BY-SA unless otherwise noted.