Start a Wiki
A Good Result 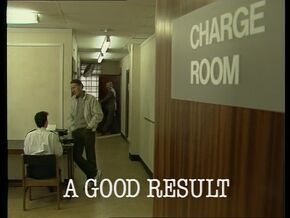 Written By
Christopher Russell
Directed By
Jeremy Summers
Episode Chronology:
Previous
In The Frame
Next
Conscience

A Good Result is the 101st episode of The Bill.

It is auto-crime week at Sun Hill: D.C. Dashwood and D.C. Carver are investigating thefts from cars, while D.S. Roach brings in a man suspected of handling stolen car radios. P.C. Smith is preparing to go undercover as a football hooligan to uncover a gang of thugs. P.C. Hollis attends the match with the rest of the relief.

Retrieved from "https://thebill.fandom.com/wiki/Episode:A_Good_Result?oldid=34577"
Community content is available under CC-BY-SA unless otherwise noted.