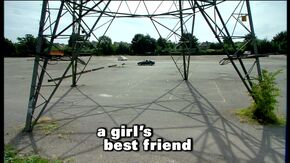 Written By
Damian Wayling
Directed By
Bruce MacDonald
Episode Chronology:
Previous
All Fall Down, Part Two
Next
Carnival
A Girl's Best Friend is the 1552nd episode of The Bill.

PCs Klein and Quinnan finds the body of a man who has died of a heart attack in a car. When delivering the man's personal effects to his wife, Quinnan is mortified to find they include a gift to the man's mistress, a woman named Alice. Trying to do a good deed, Quinnan resolves to deliver the gift to its intended recipient, but things become much more complicated when his wife Jenny Quinnan discovers the gift and thinks he's having an affair, and CID discover that the dead man is wanted by Interpol for diamond smuggling.

Meanwhile, Supt. Chandler wants everyone, including DCI Meadows, to film a "mission statement".

Retrieved from "https://thebill.fandom.com/wiki/Episode:A_Girl%27s_Best_Friend?oldid=35259"
Community content is available under CC-BY-SA unless otherwise noted.