Edit
A Friend In Need 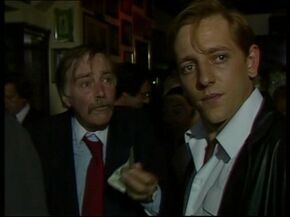 "A Friend In Need" is the 2nd episode of The Bill. Carver's in trouble again when a drunk accuses him of stealing his money. Sun Hill is rocked by a series of bomb threats.

Called to a meeting with Chief Superintendent Charles Brownlow, DI Roy Galloway is certain that the bomb threats received by local restaurants were all hoaxes. Wading through statistics, Charles is concerned that the clear up rates for Sun Hill are down compared to other stations and he wants a result, especially as two of the restaurants were Jewish making the Home Office concerned that it could be the work of terrorists, however unlikely Sun Hill believe it.

Charged with taking over the case from Sgt. Bob Cryer, Roy is unimpressed with the way the case has been handled, accusing Bob of creating the ‘delicate situation’ unnecessarily. Bob is furious with Roy’s lax approach, explaining that they had to treat it as though it were the real thing and go through the correct procedures. The two men reach an unhappy medium and place a bet, Roy insisting that he will be able to solve the case within two weeks.

Another hoax is soon reported and uniform report back to the station, having cleared and searched the restaurant. DS Ted Roach makes the most of the wait for Roy and finishes one of the untouched meals, only to be sent back home with DC Mike Dashwood as soon as Roy arrives, surprised he appears rather upbeat about being called out to the restaurant from home.

Placing Jim with PC Derek Higgins who is with Sun Hill to gain practical experience during his accelerated promotion course, Bob reasons that whilst he wouldn’t usually place two inexperienced officers together, Jim hasn’t learnt the bad habits some of the others have. Derek agrees that he needs more practical experience and is disappointed that no one at Sun Hill wants to take him out. Jim confesses that it was much the same for him until the relief got to know him and sounded him out.

As Roy arrives late, obviously hungover and wearing a large pair of sunglasses, Ted and Mike understand why he’d been so eager to stay at the restaurant the night before. Roy slowly explains that he’d managed to extract information about the call from the owner of the restaurant, like the sound of roadworks in the background and is sure that it’s two men who have found a novel way to eat out, free of charge – saying a bomb had been planted and was due to go off at any moment. Ted heads off to the ‘good’ restaurants in Sun Hill, letting them in on the boy’s plans, passing the description of the two men around.

On the beat, Jim and Derek find a man slumped in an alley, taking him back to the station where they find out he is an ex-fleet-street journalist called Wilfred Lampton who has history with Bob. Wilfred pleads for a caution, but Bob is unmoving and insists that the case be taken to court, bailing him when he’s sober. On leaving the station, Lampton immediately opens the bottle of whiskey he’d left with and heads to the pub. After shift, Jim heads down to the pub ahead of Taffy and gets them both a drink in, Lampton stepping in and paying for them, staggering across to Jim. Taffy arrives and tries to make Jim leave with him, especially after learning who paid for the drinks, though Jim is concerned and doesn’t want to leave, despite Taffy telling him it is a disciplinary offence to drink with a man on bail, and the drinks could be seen as a bribe. Sadie, the landlady, asks Jim to make Lampton leave and he eventually manages to get him home.

The hoaxers ask their friend, Kevin to make another call for them that afternoon whilst having a meal, unaware that the owners are suspicious. Kevin tries to find a phone, eventually calling into a sweetshop to use the phone. Distracted by the owner, Kevin makes a run for it, leaving the phone off the hook. The manager of the restaurant locks the exits and brings the chefs out with cleavers. The hoaxers cause a riot, shouting to the packed restaurant that there was a bomb and the customers run out, running straight into Jim and Lampton. Jim runs off to deal with the situation, unaware Lampton has just dropped his wallet. Fighting his way to the front on arrival, Roy questions Jim to find out what had gone on and sends him home, arranging for Kevin to be brought in.

The next morning as Bob is trying to find someone to volunteer to take Derek out with them, eventually putting him with Jim before Sgt Tom Penny alerts Bob to possible trouble and he goes to see what has happened. Lampton accuses Jim of stealing his wallet containing £62 and Bob calls in the Chief Superintendent. Bob berates Jim for being stupid, leaving him almost in tears pleading his innocence. Later, as Roy and Bob discuss what could happen to Jim, Derek talks to an elderly lady who has come in to hand in a wallet she’d found in the street.

When thanking Bob for believing in him and helping him, Jim is confused when handed the proceeds of the bet Roy had won. Roy explains that as the woman who’d handed in the wallet wouldn’t get a reward from Lampton, he wants Jim and Derek to go to the market to buy a gift basket full of fruit and food, much to the amusement of Bob and Jim.