Start a Wiki
A Fair Appraisal 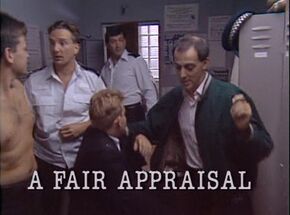 A Fair Appraisal is the 171st episode of The Bill.

P.C. Edwards is up for his annual performance appraisal and is wound up by P.C. Stamp. Edwards goes to deal with an alarm at a warehouse, failing to notice that it was an actual break-in rather than a fault with the alarm. He feels that Sgt. Cryer is giving him unfair criticism because he dislikes him, but refuses to talk to anyone about his problems. D.S. Roach and D.C. Carver arrest a couple for possession of drugs. The man gives D.I. Burnside the name of his supplier. Burnside raids the supplier's flat, but Ch. Insp. Conway pulls the men off the job before they can blow a Customs and Excise operation.

Retrieved from "https://thebill.fandom.com/wiki/Episode:A_Fair_Appraisal?oldid=36077"
Community content is available under CC-BY-SA unless otherwise noted.