Start a Wiki
A Dog's Life 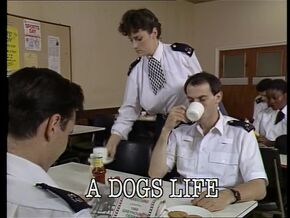 Written By
Graeme Curry
Directed By
Brian Parker
Episode Chronology:
Previous
Community Relations
Next
Trouble & Strife
P.C. Taffy Edwards is trying to find someone to form a syndicate to buy a half share in a greyhound. P.C. Reg Hollis, who is very knowledgeable about the dogs, is keen to join him. However, the dog turns out to be stolen.

There has been an increase in the amount of fly-tipping. Ramsey is asked to talk to his labourer friend, who says that there is a war on with fly-tippers. Someone is tipping all over the place and the council can't accept quiet backhanders any more. Asbestos is involved in latest tipping.

P.C. Malcolm Haynes and W.P.C. June Ackland investigate vandalism at a renovation. The mother of one of the suspects comes with him to the station. The other boy involved in vandalism has been beaten.

The apostrophe was left out of this episode title.

Retrieved from "https://thebill.fandom.com/wiki/Episode:A_Dog%27s_Life?oldid=34259"
Community content is available under CC-BY-SA unless otherwise noted.